The recent update brought quite an interesting change; multi-lingual support in PSO2’s launcher. Just the launcher, it should be said, the client itself is still only available in Japanese.

While it’s not perfect English, it’s still a curious change. What precise reason could there be for this I wonder? I doubt it’s related to the localized version for the US/EU servers, because there’s no way that English would be considered acceptable.

Not much to say about it. The main attraction right now is a giant golden ARKS badge in the center of the shopping lobby. Mostly because the two new NPCs, who are meant to be giving out Client Orders, are currently bugged.

So if you’re wondering why Lottie and Rubert aren’t giving you Client Orders then you can rest assured that it’s nothing you’ve done wrong. If you are able to get Client Orders from them then consider yourself lucky.

The Client Orders themselves seem to be the usual affair, mostly killing things. Rubert’s orders are about dealing the finishing blow to the target’s weak points where as Lottie’s orders are concerned with boosted enemies.

Wonder when these NPCs will be fixed?

Finally you can square off against Falz Hunar. Well, after you’ve completed a fair number of nodes first. Something you may want to know in advance if you’ve yet to unlock this matterboard is that for the first gold node you will need to have completed all of Zeno’s Client Orders. The cutscene with Zig will not be triggered until you do this.

Unlike most story missions there are three routes in total in Chapter 8. The first gold node unlocks the first two routes, presumably the 2nd gold node unlocks the final one (naturally the one in which Falz resides). One good thing is it’s so far the only place to guarantee an encounter with Fang Banther. Unfortunately it won’t count towards your lv45 SP orders.

So yeah, the PSVita version of PSO2 now has an official teaser site. With it comes a release date of the 28th of February 2013. Also announced to take place is a closed beta test which will happen some time in the middle of January.

The game will be sharing the same servers and data as the PC version of PSO2. This not only means that you could play the same character on the same account on two different platforms (though not at the same time), it also means that cross-platform play is possible. However as I recall, it was said this would only be possible on special blocks. Wonder if that will still be the case?

Like the PC version, it will be free to play and free to download and will have access to all the same Arks Cash services. However, you can opt to pay for it and by doing so earn yourself a special item pack, which includes codes for: 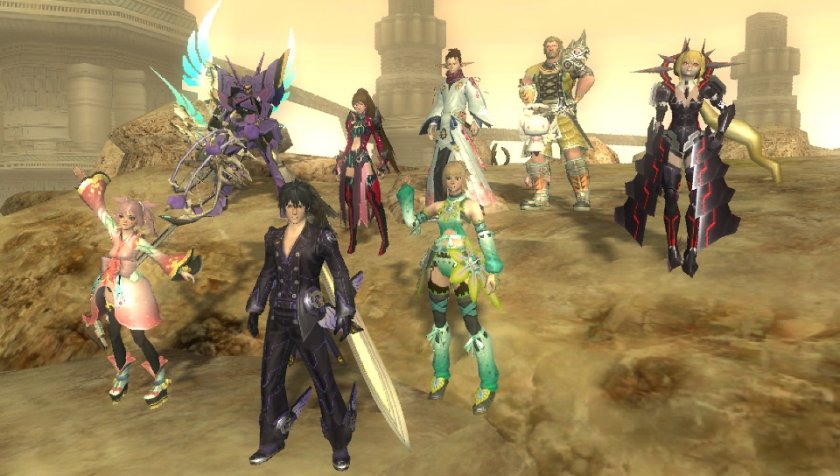 This package will cost about 5229 Yen.

Frankly, I don’t think the costumes have really scaled up to PSO2 all that well. Hell, a few of them looked pretty bad when they were ported to PSU.

You may notice something interesting if you’ve been keeping an eye on the data-mining. That dragon in the background of the main image, specifically.

It appears to be the dragon that was found in the client a little while ago, which currently goes by the name of “Hadred”. In the client it seems to reside in a side-story mission. Whether this will continue to be the case or not is yet to be seen of course, we’ve got the best part of three months to go before that might get any clearer.

The Vita version of the game is set to be released a little while after the end of the first season (or episode or version, whichever) of PSO2, I wonder how soon the second season will begin after that? Getting somewhat eager to see the contents of the next long-term schedule.

As the title says, it was announced that the Android version of PSO2 will be delayed until some time in early 2013. Not sure anyone really cares about this version of the game anyway.

The beginning of the end, indeed! As you may have gathered from the previous section the end of the first story arc is approaching. Not sure if it’s going to end with the late-month update in December or some time in January however. Along with that we’ve got the new field “Darker Nest” as well as the couple of new enemies that come along with that. Also due to arrive in the winter is the addition of a “gigantic boss”, which may or may not turn out to be another form of Falz (internally named dpfishelder. Dpfisharm is presumably related to it).

This also means that we’ll be due an update page and trailer at some point, under the name of “Where Darkness Gathers”. It’ll also be time to roll out Christmas event stuff! Doom and gloom and Christmas trees!

This will be a major update, weighing in at a whopping 4GB. However the download should be being split up into pieces so you shouldn’t have to download all that at once. I wonder how much of that 4GB will be new content and them over-writing the same data that’s already present…. Update: The pre-download service is currently broken, though hopefully it’ll be working again before the next update hits.

Finally, there’s the number of promised system changes that may arrive in December. As a reminder of some of the things due: