The fourth PSO2 Station went out today. With it we got a preview of content coming up in February and March, including information about the new level cap requirements, the solo Profound Darkness, 4-player Multi-Quest, Union weapon exchange and some PVP stuff.

Details of this post may change if I notice anything new or of course if I got anything wrong.

Wouldn’t be a proper broadcast without em! With thanks to Goukezitsu for uploading these.

White Day, seasonal Emergency Quest and new cosmetics. Chat up all your husbandos in the lobby!

During the stream they confirmed some details that I talked about in my last post, unfortunately.

Koffie will be getting a new Client Order that will require you have completed your class SP orders (all of them) and have one of your class’s main weapons at +35 (Gunslash presumably doesn’t count), 13* rarity or higher. Summoners will need a pet at lv120.

So yeah, Gheaven was right about most of it unfortunately. They were wrong about the affix requirement at least which is a minor relief in the face of now having to grind out additional Collection Files just to get a +35 weapon for potentially every class and subclass of any alts you might want to level to 80. I need someone to check the wording on the condition, otherwise it sounds like Gunner/Ranger and Force/Techer might have it a little easier than other combinations seeing as they share weapons or if indeed said shared weapons won’t count (Rifle and Talis respectively).

Beyond that, my opinions are much the same as in my speculative post on this. This is going to be a significant bump in the road for new players down the line who will now have to be stuck at lv75 grinding out 21 class cubes just so they can earn permission to level up to 76. The +35 13* requirement might also be awkward down the line unless future collection files will still cater well enough to content under lv80.

Still, they’ve been known to relax these kinds of conditions given enough time so it probably will get better in the future. The whole thing seems needlessly clumsy to me but they kinda engineered themselves into this corner.

The solo fight against Double and the Profound Darkness will be arriving early February. With it we’ll be seeing the return of the Ray series Collection Files. You’ll need Ray weapons if you want to be able to exchange for Union weapons.

It’s worth noting that even if you don’t want Union weapons you may want to run this quest just to complete Ray files as its Special Ability Factor is Astral Soul.

This quest is only available on Extra Hard and requires your Main and Subclass to be Lv75. The enemy is lv80.

You’ll have 20 minutes to clear the quest. While it was fairly obvious they’d reduce the boss’s HP I feel this detail confirms it because I just can’t imagine them expecting you to defeat a boss intended for 12 players in 1/3rd of the time.

Looking through the trailer, it seems like the boss is using the newer AI but it also has the old behavior where it rests its head on the arena. It also seems like its attacks don’t hit nearly as hard as in the full raid on Extra Hard (I believe the fly-by attack deals roughly 1200 damage in the raid, 550 or so in the trailer) though of course it’s hard to tell how the test player’s build is interacting with that. They’re not running Guard Stance at least.

Xie’s weapons will be getting a 2nd potential which will help you clear the quest more easily. It appears to boost damage dealt and reduce damage received while running this quest, but the numbers are hidden so it’s hard to tell how good this is.

They’re going to be adding a Quest Trigger for the solo Emergency Quest for 50 Gold Badges a shot. Not too bad! I guess there’s a use for medals now outside of getting the dance lobby actions.

In order to upgrade from a Ray weapon or unit to a Union weapon you’ll need 5 Union Boosters. You’ll get one Union Booster per clear of the solo EQ as well as an additional one for each S-rank. 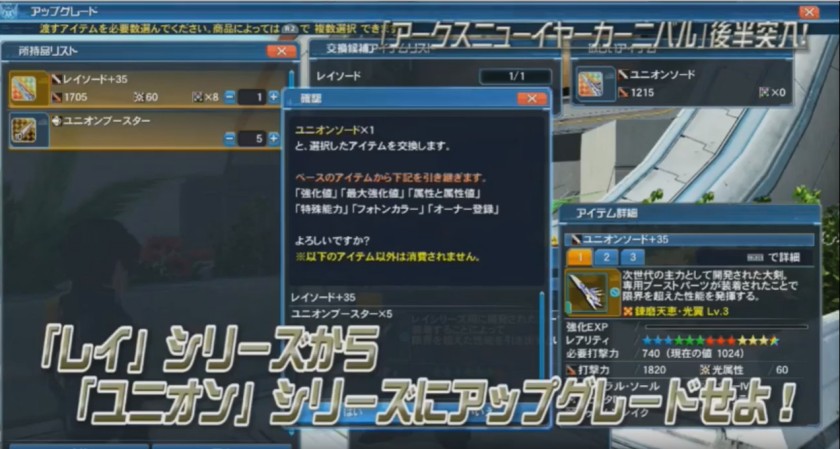 When you upgrade, the item will retain all the upgrades you applied to the old item (so element, grind, affixes etc).

It seems Union Sword has 1215  S-Atk, which if true makes it the 4th strongest sword in terms of raw attack power. If it retains the Ray potential this just means that it’s a slightly weaker Astra weapon though it does offer some damage resistance which Astra doesn’t.

A short romp through all the Ultimate area bosses! Presumably it’ll let you have shots at their gear and affixes should you even want them by this point, though their rates might be even lower than their regular counterparts because…

The enemies in the quest are lv75. I don’t understand why they felt the need to do this. Is it because they don’t want to make the current Ultimate Quests redundant? I mean in many respects they already are so I’m not sure what this decision is for.The exception is for Ultimate Amduscia enemies I guess, which could still drop 12* units and Gix weapons which are still relevant for now. Beyond that though I’m certain they can’t be being too wary that we might get Ares weapons too often!

I’m sure they have a good reason for it and ultimately I don’t think it’ll take too much away from the quest itself. What’s worth noting is that most of the bosses seem to have titles, so it might offset their droprates towards something a bit more reasonable. I’m looking forward to getting a couple friends together to smash some boss’s faces in whatever the case may be.

Apparently, if you run the quest by yourself the enemy’s stats will be adjusted. Pretty neat if so because I believe this would make this the first quest with actual scaling in it, which is something I’ve felt the game’s been in need of for years…

In the near future, you will no longer be required to have 10-12* weapon passes or 10-11* unit passes in order to be able to buy those items. This has been a long time coming as it’s felt wrong to have most of this gear which has been years out of date to be locked behind a paywall.

The upside is this means it will be easier for new players to get kitted out with 12* items and Affix fodder items wont be restricted to 9* and below anymore. The downside is those of you who converted 12* gear into passes will have potentially lost out.

I’m curious if this means we will be seeing 13* weapon and 12* unit passes soon? It might make +35ing weapons significantly easier for paid users at least though that might make the requirement all the more irritating for free players.

So that’s it really. The surprise trailer was just showing that Battle Arena will have at least 3 maps with one set in Amduscia’s Cauldron and the other in Tokyo. I was actually hoping they’d at least give some more details about things surrounding the PVP mode (like if any items can be earned).