Valentines is here again and once more we’re saving the women of the ARKS (of which there’s a fuckin lot of them) in the volcanic caverns of Amduscia. We’ve also gained a Limited Quest, “Chaotic Darkness”, as part of the PS Festa 2016 Web Event set in the often forgotten Facility field of Vopal, set to the Temple VR Field music of PSO (A Longing to Ancient Times). As it is a web event, I’m expecting the usual selection of prizes, so it may well be time to get your Dudu on soon…

Just gonna go over some details of the update quick. I know I’m behind on Episode 4 stuff. A Summoner guide is in the works, just been needing to get some particular bits of data for it… Kinda dropped the ball there but oh well.

As new information is coming out for this quest, the contents of this post may change. Let me know if there’s anything I got wrong.

Bingo details can be found at Bumped here. Frankly the prizes aren’t that good this time around, or else I’d put together a quick clear guide.

As is the trend with these quests lately, it starts on a group teleporter before you’re allowed to begin the run. While I’m sure there are some advantages conferred by this, I’m not a huge fan of standing around waiting for the counter to hit 12/12.

The quest stars every kind of enemy that isn’t a Phantom or regular Aberrations. The bigger thing about the quest is it has multi-boss spawning E-Trials that can include multiple Dark Falz humanoids (as well as Dio Hunar). This quest also sees the introduction of 2016 Weapons Badges, which can be obtained much the same way as the 2015 badges could in their debut Limited Quest, however Bronze Badges don’t seem to exist. 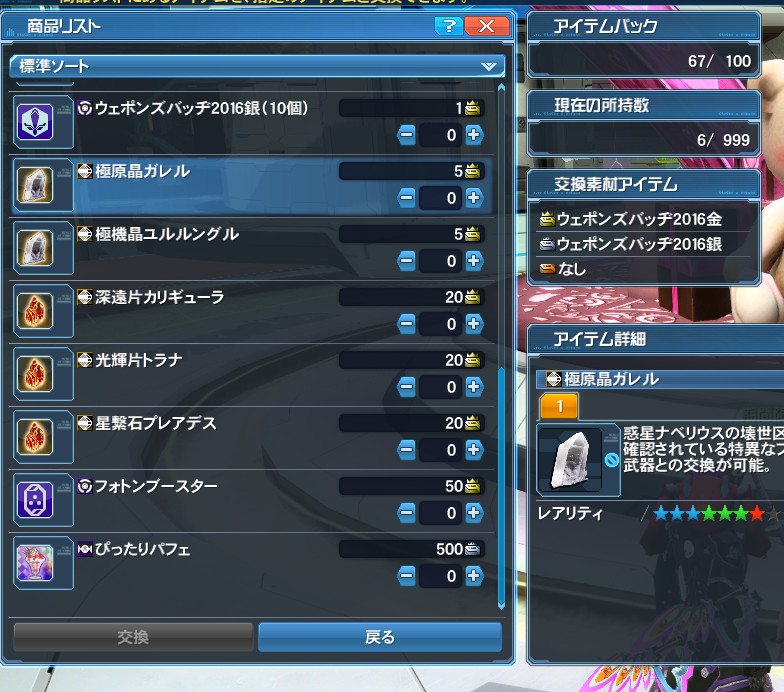 You can use these badges to purchase a selection of nostalgic weapon camos (at 350 gold badges a pop) as well as exchanging them for stones. You can exchange 20 gold for 1 Caligula, Torana or Pleiades stones or 5 gold for a Yurlungur or Gale stone.

This means that you can effectively obtain an Orbit weapon using nothing but badges. You will need to obtain the Neros from elsewhere in order to get an Austere however. That’s not such a bad thing as Neros themselves aren’t too horrendous to obtain. They’re not exactly easy to get either but they’re a fair sight easier than Caligula. 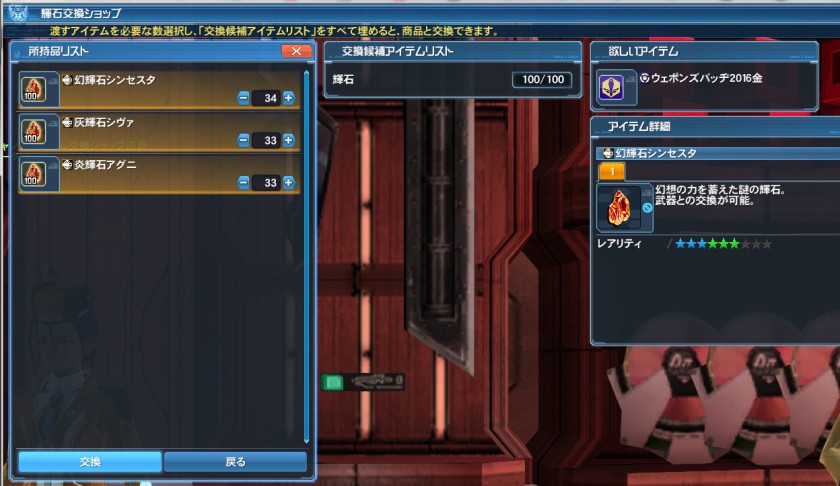 Somewhat interestingly, they added an exchange to the Shiny Stone shop that lets you swap 100 of any spellstone for 1 gold badge. This includes small AQ stones, Elder’s Iritista and Loser’s Syncesta. This means you can effectively obtain an Orbit weapon by running VHAQs at the minute, which is a bit surprising though that’s quite a nasty exchange rate.

Yikes, that is a LOT of VHAQing! That said, clearly the intention isn’t to let you run AQs for Orbits but rather it’s to let you actually do something useful with all those stones laying around doing nothing. Let’s do the same for Orbit:

Given you can obtain the whole weapon this way, Caligulas only really seem worth it if you absolutely require an Austere weapon for whatever reason (maybe you’re close to the 400 Caligula you need already and so on..).

As for wether or not it’s feasible to obtain the number of badges required in the time the Limited Quest is available it’s hard to say. It’s only available for two weeks and the event itself only for a month, so I’m going to go with “no” unless your tolerance for grind is legendary.

Ultimately this exchange seems to be a means for topping off, not for starting from scratch. It lets you clear out your inventory of stones you don’t need to help you get closer to that Austere or Orbit weapon of your dreams. It’s a terribly impractical way of starting from scratch, particularly if you also want to get some Weapon Camos.

While you can exchange 2015 badges for 2016 ones, it’s at a rate of 10:1. The Yozakura series weapons still require 2015 badges though. While Yozakura are a terrible investment for 13*s anyway, they do have marginal use as fodder for element swapping and synthing, so bare this in mind before you throw all your 2015s away. The old ways of obtaining 2015s now only give 2016 badges at that, so unless they update the exchange the series has become completely unobtainable now (as opposed to almost unobtainable before).

Falz Angel can drop 13* weapons appropriate for your class, which seems to be limited to the slave-series weapons. He can also reportedly drop 13* eggs. This change applies to any Falz Angel in the lv71+ level range as far as I know, however it’ll only be in effect during the lifespan of the limited quest. It seems Slave-series weapons are also an area drop of the entire quest, but may not be subject to the class-based bonus to rates that Angel reportedly has.

Diabo Igrithys turns up, but is the regular slowed-down kind you encounter in Ultimate Naberius. It, Gal Gryphon and Falz Angel seem to be more likely to appear towards the end of the quest (around the 1800 point mark). I don’t think Gryphon can actually spawn any earlier than this, but the roughly 1800 point mark seems to spawn a guaranteed selection of rare-dropping bosses.

Unfortunately, Dio Hunar doesn’t seem to be able to drop Caligula or Ares stones (or at least if it can the rates are abysmally low) like it used to in the Christmas Emergency Quest. This is because the EQ version was Lv80 and this one only Lv75.

Another run around in circles affair with a gate that likely won’t get fired until your MPA is 12/12. Standard stuff, really. Has every flavor of Darker along with the Amduscia natives. The main attraction to this quest is the mutated Diabo Igrythis. This variant of the fire-y bird is the same as the pre-nerf Ultimate Naberius, so it will seem much faster and more aggressive than its Limited Quest cousin. As with other seasonals, this Emergency Quest can happen whenever there’s a general emergency on its planet, as well as at the scheduled times. 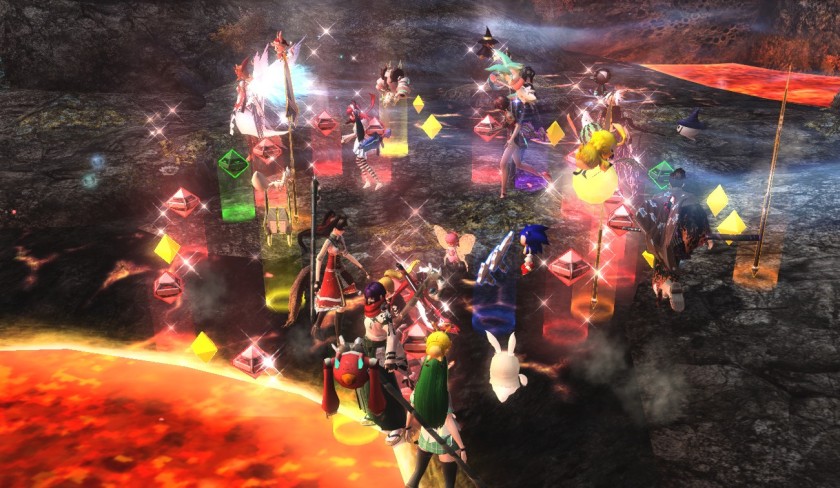 This Diabo interestingly drops a large number of badges and Gale stones. It also drops items with Mutation II affixed onto it, which boosts the chance of fusing Stat III affixes into Stat IV affixes. Diabo seems to be a guaranteed spawn once you hit the 210 point mark.

Emergency Quests are one the latest features to be announced for Phantasy Star Online 2. They are not to be confused with Interrupt Events, which are mini-objectives that can occur somewhat randomly during regular and free-field quests. They are quests which can occur randomly throughout the day and are only available for a short period of time. Players will get some sort of message before a server-wide announcement of the emergency is broadcast. 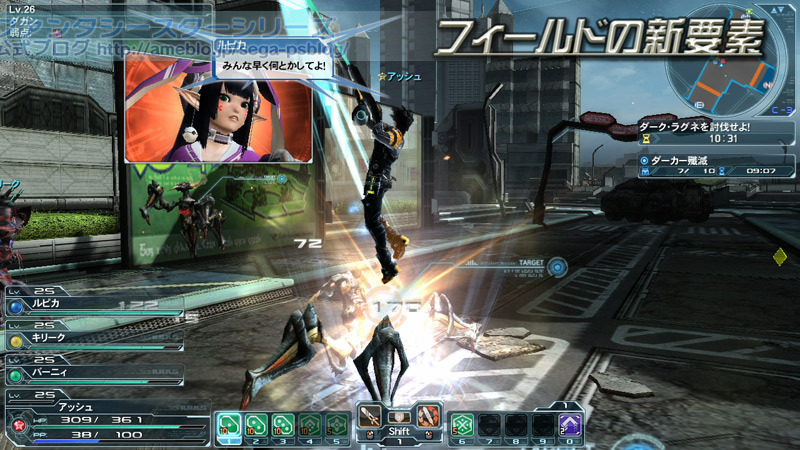 This feature will be available during the closed beta tests and will directly concern themselves with the new city area. This city incidentally is on the Arks Ship, not on any particular planet. This makes me wonder that the only reason Arks would be deployed there would be to deal with emergencies, so it’s possible that the only time we’ll get to see this new area is when an emergency quest is available. 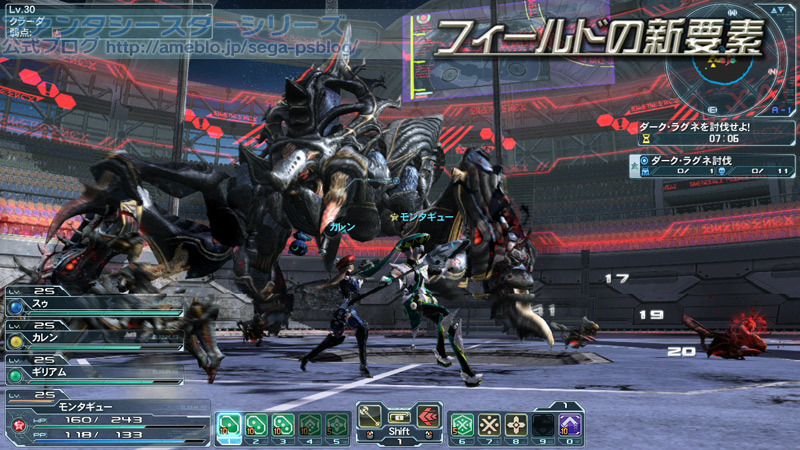 Of course, along with this new area we will get to square-off with a new boss as well, a giant spider like thing which goes by the name of Dark Ragne. Like the Vol Dragon, it can randomly spawn during a mission in the city area as well as residing in its arena.

Of course, I do find myself concerned that the boss may be a lv25-30 encounter still, despite players being capped to lv20. I have no idea how much of a difference that could make, given that they did say there was a rebalance of sorts so even my experience in the previous alpha is not a suitable reference. Hopefully it’s not too severe, or else the boss could be simply too frustrating to fight.

So turns out Mags will affect character stats in much the same way as they did in PSO. Mags have the same stats as players, so they can be used to support whatever build you happen to be going for,. I wonder if you can swap out mags mid-mission, essentially switching focus mid-battle. For example, say a boss monster is hitting you especially hard, you could switch to a Mag with defensive stats to give you a boost to survivability.

You will have to raise them, still, but this mechanism hasn’t changed any since it was announced. You still feed your Mag items and equipment and the stats will raise or fall depending on what you give it. Presumably the evolutions of your mag will depend on the stats it has at certain level milestones like in PSO, but this hasn’t been expanded upon.

Disregard that, I can’t read. The cap will be lv99, which is enough for the Mag to reach its second stage of evolution. I still ponder if having a capped Mag will be enough to overcome any potential level gaps, however.

Finally, as in PSO, you can indeed chain photon blasts together. Doing so will boost the overall power of your blasts.

Can’t wait to start raising your Mags, eh? Well hold up there, bucko, you’re gonna need a license first. You can obtain one after receiving a certain client order. That’s all. I presume the function of the client order will be to introduce players to the concept of Mags or else it seems like a rather un-necessary step.

In PSO, you could trade Mags between players. There has been no word on whether or not you can do this in PSO2, but I rather hope not. I have no issue of Mags being account-bound, essentially making alts easier to raise than your first character, however