The 38th broadcast went out last night. Being the final broadcast before the actual expansion, its time to iron out any remaining questions surely? Well of course not, while some details are fresh we mostly got stuff we already knew about.

As usual, this post will be a gathering of the various trailers shown throughout as well as sharing my thoughts. Bumped has done their summary of the broadcast as usual, and will cover some details that I won’t. If you’re interested in taking part in the PS4 beta in particular, check it out. Naturally I’ll be talking about some things Bumped didn’t as well as sharing my own dumb thoughts cause that’s what I do here.

First off; Henri is BACK, motherfuckers! 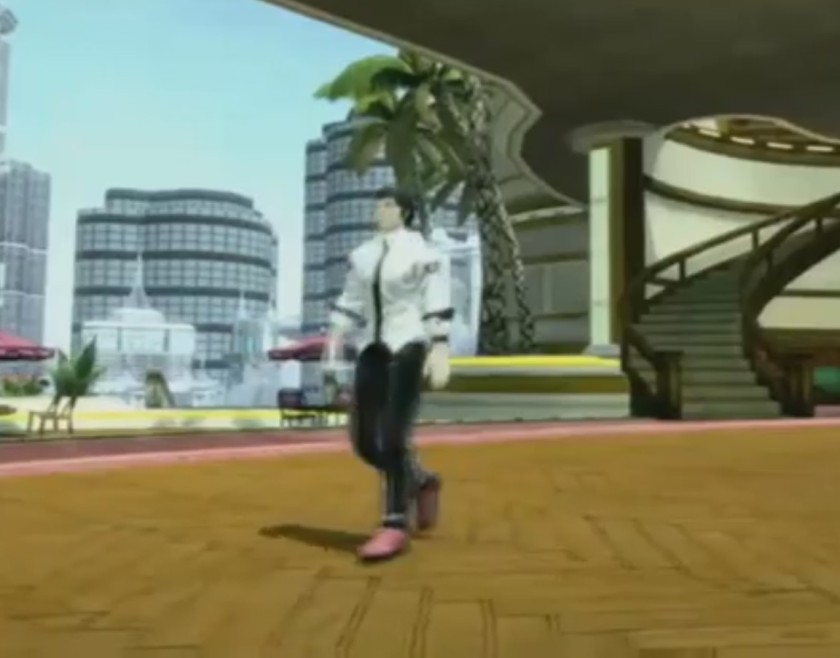 Was worried he’d drowned in pussy or something, welcome back you… guy who walked back and forth in the lobby! You’ll notice the area he’s wandering around in is new: more on that in a moment.

I guess this explains the inventory expansion. I think I’d be livid if they introduced an entire new way to fill your bag up with no expansion to help you out.

Much like with other games, you essentially seem to walk up to a node and press buttons to make a thing happen and you get an item. Fishing requires at least some timing it appears, for which I assume you’re just pressing a button when a fish bites I guess.

Gathering is limited via a stamina bar. It isn’t certain exactly how this works, but i feel confident in saying that Arks Cash will probably be the miracle cure for fatigue.

So what do you do with these newly acquired materials taking up all that additional inventory space you just got? Why, you take them to Franca’s Cafe turn them into cuisine and rings of course! You know, your regular jeweler in the Cafe. That’s where Henri is wandering about earlier in the post, by the way. That handsome devil.

We’ll be gaining 2 equipment slots in which we can equip said rings. Presumably Rings will be made from metals and such, but some will also need Lambda Grinders. They’ll be in the armor and costume menu. Rings seem to mostly augment class skills, but they can also raise stats. Some mentioned include:

The skill augments are potentially interesting I suppose, but I can’t help feeling that at some point there’s gonna be some straight up damage boosting rings and those are going to be the only ones worth going for. Unless they keep them strictly utility of course, in which case it mostly won’t be worth bothering with unless the augments really are interesting. I’m being cynical here I know, but I’m so used to them half-assing systems they’ve introduced before. Yes, the skill augments could be interesting but remember when Photon Art customization came out? Remember how that “could” have been interesting? What about Timed Abilities?

Rings seem to have something like a grind value (they’re pictured at +1) but they also have an EXP bar. How this EXP is acquired, who knows. It’d be easy to assume its just via killing enemies and such, but it could also be feeding it materials for all we know right now. They also seem to be restricted to the right or left ring slots, though I don’t know the significance of this yet. As in, what trends might right-slot rings have that left doesn’t and vice versa.

Cuisines are gonna work like the food items we can get now I would assume, so essentially stat boosters. The food shown lasts 1 minute and 5 minutes though, which is kind of a tiny period of time. I assume higher ranked food lasts longer, but who knows.

This system is set to arrive in March. Why so long after the expansion starts? Cause I have no idea, gotta spread it out or something. While on this cynical bent I guess I would say that they’ll probably only release 10 rings and 10 foods initially or something too, then six months later remember they started this project and bother to add some more things. Prove this cynical shithead wrong, Phantasy Star Crew, see your system through!

We got a good selection of videos this broadcast, but unfortunately the vast majority of the time they don’t really show anything we didn’t already know. As such, I feel the best I can really do here is comment on various tidbits after the trailers.

First is a trailer showing us essentially everything we know about so far. This is a long one and it does show quite a lot of things, worth watching for a refresher and for the adorable emperor Rappy rolling around.

Next is a shorter trailer showing off the Valentines update.

We’re getting a new character creation demo, complete with new bench-marking test video. As always with these, I’m kinda saddened we don’t get cutscene’s this dramatic in-game. That said, maybe I just like over the top cheesy things I don’t know. The demo is slated for release in late February.

Just a couple of videos demonstrating Summoner game-play as well as showing off the Tokyo field. Skip about 5 minutes in to get to actual game-play.

I don’t know, the class looks kind of awkward to me still. Maybe it’ll feel OK to actually play it, but it just seems like you don’t really have as much control over your pacing as this class as you would for all the others. It seems like the game-play would just be too passive for my liking, though this style may well appeal to some. It’s only a little over a week before we get to try the class for ourselves, so we’ll see soon I guess. More importantly we can finally start to answer some questions the developers never seem to, such as how certain class skills interact with pets and how summoner skills may interact with other weapon types (if at all).

Notably, Train Ghidoran doesn’t seem to be the boss of the Free Field on Tokyo. Instead, it;s the boss of what seems to be the 2nd Arks Quest. I doubt the Free Field has a new boss, so instead I have to ponder if the quest itself essentially just functions like an Ultimate Quest; where it ends once you’ve reached the quest point quota. As they didn’t demonstrate it, I can only guess for now.

As we know, the character storage box starts at 300 items but can be expanded to 1000. It seems that you can increase it in 50 item increments for 800 AC each. This brings the total cost of expansion per character to 11,200 AC. That’s kind of expensive, but then +50 personal storage costs 1600AC right now.

Mutation II is coming out. It’s been in the client data for as long as I can remember. You can obtain it from a special titled Diabo Igrythis that only appears in a seasonal Emergency Quest. You can also create it yourself from 5 Mutation I at a 50% success rate. Mutation I boosts the fusion success rate of stat II into stat III. Its more advanced form will do the same for III to IV. 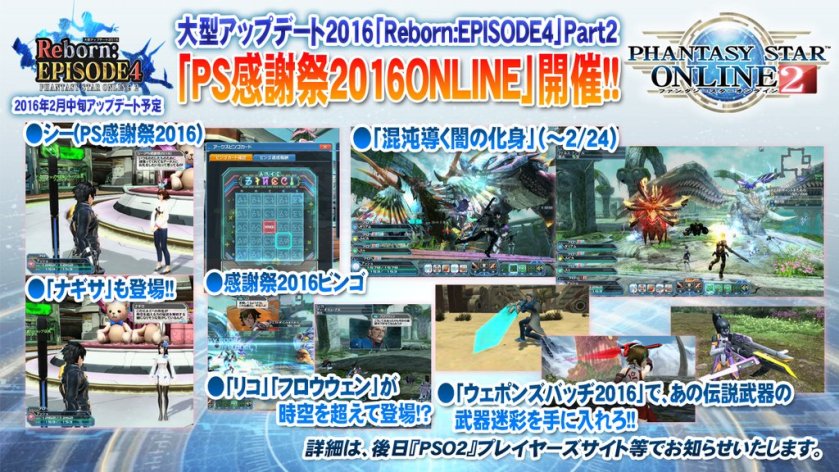 2016 Weapons Badges are coming out. You can get camos of various PSO weapons with them, that’s about it. You can exchange 2015 for 2016 badges at a 10:1 rate. Given you need 350 just for one camo, that exchange might be a little harsh but then if you got your entire badge supply from the get-go it might impact the upcoming event. The badges will primarily be available during a Limited Quest set on Vopar’s Facility field for the PS Festa event. This will be a full on web-event, so there’s a chance of event bonuses that can be earned as well. Rico and Flowen seem set to turn up, but who cares about them.

There will be a bingo card for this event, but so far the rewards on it look pretty unremarkable compared to previous offerings.

There’s a rumour that soul fusion was mentioned during the show, involving things like Vol Soul and Vardha Soul. Essentially it’s a new Astral Soul type of soul fusion, only with different results. One of the alleged results is an R-atk +35 PP + 3 soul. I have no solid source for this however, so treat it as a rumour.

Seems Tokyo weapon potentials are out. Seiga series weapons regenerate HP over time and boost outgoing damage by 11%. Earth series weapons grant a 6% damage boost and a 10% damage boost for critical hits. There’s also the Quartz series weapons, which apparently have increased PP regen on attack and a damage bonus when above 30% PP. Unsure on source, so treat this information tentatively.

These are some strong potential abilities if they turn out to be true, possibly even trumping Austere weapons depending on how exactly they work and how strong the weapons themselves end up being.

Seiga Sword is listed as having 1152 attack. As the weapons appear to come with Ability III, Mutation I and Stat III, you can take away 55 attack from them.  This brings Seiga Sword’s base attack down to 1097. This puts it at slightly better than Orbit but inferior to Invade and Austere in terms of raw attack.

Still no Ultimate Amduscia! I’m starting to wonder if the area got scrapped. It’s likely more a case of bad timing, as you probably don’t want Ultimate Amduscia coinciding with the release of a new area and a web event. It’s that ever persistent fear of splitting up the player-base that modern MMOs seem to have, but they may have this “fear” for a very good reason. As a reminder, Ultimate Amduscia isn’t on the schedule between now and late Spring.

Overall, between the pets, rings and the associated gathering systems it seems we’re gaining a number of new grinding treadmills. It’s difficult to pass judgement on them completely until the systems have arrived, and much of it won’t be until Spring starts. For all I know, these systems might well boost the experience but maybe it’s my overly cynical mood today but I’m just not convinced.

There’s really not a lot else to say I don’t think, so I’ll end the post there for now. I know this has come across as cynical and I’m sorry for that. Just consider that I’m a bit burned by the developers introducing new systems before, full of promises that then kind of fell flat. For all I know, these systems really could be good, Summoners could be fun to play and pets won’t be irritating to raise. PSO2 may be a better game with all this stuff, or it could be really about the same as it is now. We’ll see.