This information comes from a Japanese blog here, which goes into some detail about a lot of the stuff shown at the last live broadcast event. The interesting part is the data on weapons a little way into the post. I plan to talk more about those when they’re actually released in a few days, but for now I’m going to focus on the one weapon.

I’m filing this under the rumour mill because I have no idea where the above post got most of its data from. As a result, I can’t verify most of this.

If that blog is right then Yasminkov 4000F boasts a whopping 1590 R-Atk at +35, which is a whole 3 R-Atk stronger than Austere Cannon. It comes with the same potential that Double Cannon has, which is 15% boosted damage and 15% increased PP consumption at Lv3 (it’s currently 30% but it’ll be changed to 15% with this update. This affects all weapons with this latent!). Given Austere Cannon’s potential is 11% increased damage, this means that Yasminkov4000F will be the strongest Launcher in the game, though it will have that 15% PP consumption drawback.

I feel like this is at least somewhat significant if it turns out to be true, because while there are weapons that do beat out Austere in specific niches as far as I’m aware this would be the first one to out-class them almost in general.

Possibly the first weapon that almost unconditionally out-damages its Austere counterpart and it looks like a Nerf gun… According to the blog, it seems like it’ll be an area drop from the Vegas field.

There’s two big things that as far as I’m concerned makes making a new tier sort of awkward right now. For one thing there are no new tiers of content on the horizon, though with how long it’s been delayed it can only be assumed that Ultimate Amduscia will arrive with it. It’s the only way I can imagine them making the area relevant, especially if future waves of weapons end up competing with Austere.

The other big thing is the significance of Austere weapons themselves. They do come from essentially the most destructive force in the PSO2 universe so it’d be strange if just a general trash mob on earth dropped something better. Completing them also kind of requires you to run a large amount of content including Extreme Quests, various quests with Lv75+ Dark Falz enemies, Challenge Quests (sorta) and Ultimate Quests. While many of the items do have alternative ways of getting them now, making these weapons obsolete could also make a large amount of content pointless to run which is an issue they haven’t had to deal with in previous tiers…

Essentially, it was believed that party size was related to the amount of EXP you gained per monster kill. Not only that, but AI characters also counted towards this EXP bonus. A very easy one to test! 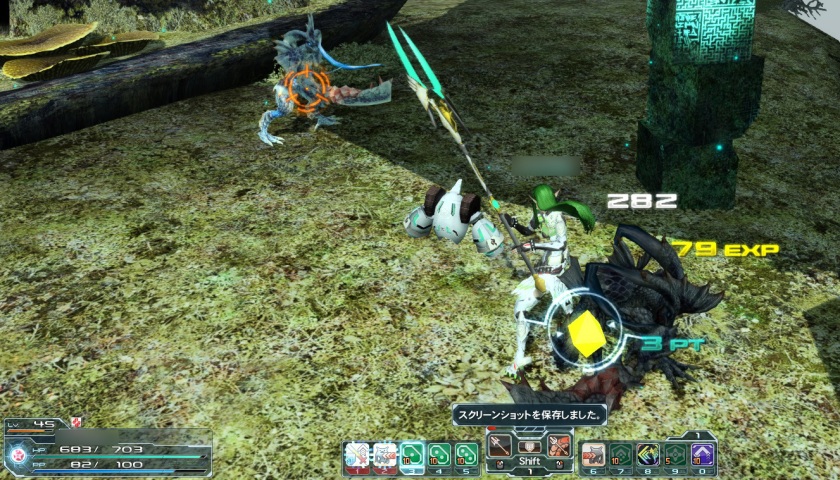 For the test, I slaughtered Set Sadinians on Very Hard in the Beserk Dragonkin Arks Quest Starting with just a single-member party. Upon adding a Friend Partner to my party..

The EXP does indeed go up, really confirming the rumour there and then. Maxing out the party with Friend Partners raises the EXP to this: 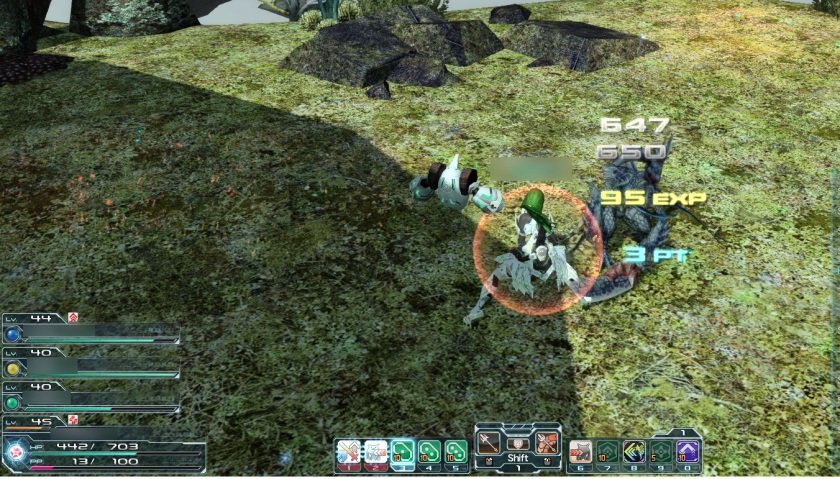 That’s a significantly higher amount of EXP than you get for going in with no AI characters, in the region of 20% more.

You may be aware that, generally speaking, inviting AI characters to your party is frowned upon in the player base, especially if you don’t lock your multi-party. It does after-all deny actual players a spot in your party. This is a bad thing because while having AI characters in your party does increase the EXP per kill as well as the complimentary benefit of increasing the size of enemy spawns it doesn’t increase spawns as much as an actual player would. Therefore you are ruining the multi-party’s potential for all players on the map.

Incidentally, the effect does not include players or AI characters from other parties, it only scales from your own party. This means that the most effective way to grind in a multi-party area is to join as a full party, but don’t do it with AI characters

Seems to be a self-defeating system in that respect doesn’t it? A player gains a fair advantage bringing AI characters with them at the expense of all other players in the multi-party.

Overall, it just seems like a clumsy way to encourage people to play together and yet another mechanic in this game seemingly engineered to punish players for soloing.

Yes, I am putting this under rumourmill despite giving out a warning on this very site to not AFK in case this should happen to you.

In case you are unaware, there is a rumour going about that players are moved behind the glass in the lobby and then reported for hacking. This results in their accounts being banned from the game.

What Is Not A Rumour

There are hackers about and they can move characters. The updated terms of service prevent me from sharing details, but the people most at risk are people AFK in the lobbies. The victim is also the only person who wouldn’t know they were moved. If you’re moving, you are at no risk whatsoever.

You can probably see the potential is that people may be moved somewhere unreachable and then other players would see them as hackers and report them. The hacker themselves could also send in reports theoretically.

What Is A Rumour

People have been banned for this

This however, does fall under rumour. Yes, there are a number of posts by people who claim this has happened to them, but none of them seem to stand up to scrutiny.

For one thing, if this really were the case and Sega were acting on such reports don’t you think more people would have been affected by this? As it stands, I can count the number of reported incidents with one hand.

The people who post the “I GOT BANNED” threads don’t seem to post any messages that they received from Sega about their ban. You’d think that would be self-explanatory given that they’re playing a game in a language they can’t understand but there’s a problem with this. One of the first such posts actually included information that they got a 3-day temporary ban, which indicates that Sega may let people know the nature of their punishment. It’s possible they post more information too, so why are they electing not so show this in their posts? You’d think that someone confused about the nature of their ban may post the contents of such a message (with necessary ommisions)  asking for a translation from the forum. Or at least posting whatever Google Translate poops out. As it is now, we have no idea if the players in these posts were temporarily banned, permanently banned or what.

This last is more food for thought than anything, as I have no physical proof of them doing it. But, have you ever been to Block 20? People post some obscene symbol arts. I’ve seen pornographic symbols, racist symbols and less offensively just plain cuss words in symbols. All these things are against the terms of service and if a GM happened to see your account posting something like that or if another player reports you for it, it could well end up with you getting banned. Having an offensive name for your character could also result in a ban.

So should I AFK in the lobbies seeing as all these guys were lying?

No and I’m not saying they’re all liars. Claims require evidence and I lack as much evidence as they do.

All this post is for is to illustrate said lack of evidence that anything is happening to any player that got moved outside the lobby window. If such evidence were to crop up, I would eat humble pie and curse Sega of Japan for being so stupid about the way they’re handling this situation.

Said lack of evidence could actually be harmful, too. If Sega are banning players for this and there is sufficient proof, an effort could  theoretically be attempted to try to get Sega to realise that they may be banning innocent players. Without evidence, that can’t happen. Of course, acquiring said evidence isn’t easy. It requires screenshots of the victims outside the window for a start (remembering that they naturally won’t be taking it themselves).

However, Sega can be quite dumb when they want to be. It IS possible that this is more than a rumour, so the advice is unchanged. Err on the side of caution, do not AFK in lobbies.

You won’t get banned if you use the Cash Shop. Only F2Pers get banned!

This is completely unfounded. Spending money in the cash shop does not mean the rules no longer apply to you, it’s ridiculous to think otherwise.

You’ll get banned if you spend money in the cash shop!

Yes, always the best business plan to ban your customers for giving you money. Of course this clashes with the previous rumour and also feeds off the assumption that because many used fake addresses in order to buy Arks Cash they’ll get banned because of it. Yes it’s against the terms of service, but people have been using fake addresses since PSU and possibly before and no one has been banned because of it. Sega like money

This is again, also completely unfounded but not impossible. If such a system exists though, ask yourself how do the people who say this is definitely the case know about it? If they’re a victim of banning how could they possibly know how many reports were sent in about them? Are they the ones doing the reporting?

Don’t just take people on their word that they got banned because of this. They might have, but there’s a considerable lack of evidence that says this is definitely happening.

There needs to be more information posted about the nature of the ban if you yourself were. Do Sega send a message do your account’s email explaining why you were banned? Do they tell you the duration? Were you definitely just AFKing in the lobbies or, really ask yourself, did you do anything you probably shouldn’t have?

Also, if you’re going to AFK, do it in the Camp Ship or in your room. Or better yet, log out of your game and save some money on your electricity bills.