The official PSO2 blog updated just recently with information concerning the cash shop, as well as a number of clarifications regarding the closed beta.

Also included in the post is a high-quality release of a new trailer that was shown during the 2nd Media Briefing.

The player level cap in the closed beta tests will not be lv30 after all. It’s now 20 again. This, I have to say, it a little disappointing. I was hoping to see how the classes would grow in those 10 levels instead of having access to the same set of skills as I had before. Am also rather hoping that the city area won’t be too difficult now, assuming it’s balanced for higher level players.

This is incidentally the only change. Everything else is still in-tact, which is good to know. 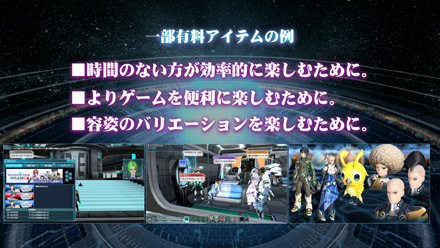 First of, some of the key intentions regarding ths shop:

This, rather doesn’t rule out the possibility of indirectly selling items of course, but you won’t be able to just buy your way to the top gear either. The types of items that Sakai says that players should expect to see in the player shops are:

These are more like add-ons for your account, (updated information below). If you’re soured by this, remember that in the PSU free-to-play model you had to pay a subscription fee to do any of these things. Also remember that you’re not having to pay for the client this time (although PSU JP did drop the client fee eventually).
Incidentally, it seems some communication abilities may be locked until you buy some system items, which is apparently aimed at fighting bots, spammers, gold sellers and the other usual annoyances in MMOs. Of course, if subscriptions and client fees don’t keep them out (and they don’t), this certainly isn’t guaranteed to, but I don’t mind making life harder for them.
Update: Seems some of these system items will be timed, others will be permanent. There as no specifics as to what, however. That has the potential to be very bad news and I hope that Sega very carefully considers their options here.
I’m also hoping that they don’t intend on that skill tree extension item to be the only way to try out new builds, either. I want a means to reset my tree if I make a mistake.

Scape dolls as a cash shop item? Oh dear. This will obviously impact soloers more than anything, as Moon Atomizers are purchaseable from NPCs (and will become dirt cheap by endgame) and Forces might get some form of resurrection skill at a later date. Remember however, that partying with randoms isn’t the handicap like it was in PSU. You’re not penalised for not getting the last hit in on enemies. You’re not missing out on drops as everyone only sees their own drops anyway, so by that logic playing with others is actually beneficial as monsters are dying more quickly, which means more rolls at obtaining items in less time.
Scape dolls were an item that I always felt impacted co-operation anyway. What is the point of helping team members back on their feet if they could instantly revive themselves as soon as they were incapacitated?

Standard cash-shop fare. I’ve already read reactionary posts getting upset about EXP and Drop-rate boosters. Would like to remind those people that said items were available in PSU even back when it had a subscription fee and client charge. No one gave a shit. Once again I’d also like to ask how exactly does it hinder you as a player? If another player is levelling up more quickly or is weilding better gear, it doesn’t impact your levelling rate. You are not competing with anyone in this game!

More usual cash shop stuff, really the more benign kind that no one really gets upset about seeing as it’s all vanity anyway.

There will be two lottery-style cash shop features, called “Arks Scratch”. The cheap version contains a larger variety of items including accessories, clothing and consumables. The more expensive one only contains clothing.

As a final note, many of the items acquired through the cash shop can be traded on the player market. Some can’t, but it seems all clothing is up for grabs at least.

So there you go, some actual information about the cash shop. It came in just after I criticised people’s concerns about the free-to-play system and it didn’t contradict anything I said. I see no pay-to-win in any of the items on offer, just the expected “pay to go a bit quicker” and “pay to dress up slightly differently”. Admittedly, some items may well give players who pay an easier time when soloing, but there’s little benefit to soloing in this game anyway.

The very near future, at that! Sakai will be talking about the upcoming character creation demo due for release on the 5th of April.

The game’s release is still scheduled for some time early in the summer, but no specific date has been given yet. The smartphone version of the game is scheduled for release in the winter.

To finish off, a piece of artwork by Akikazu Mizuno.