The September 21st update added a new time-attack quest set in Tokyo. Just gonna do a brief write-up of it as well as go over some additional tidbits concerning the content update this October.

This one is a bit more of a parkour-ish obstacle course than the other time attacks. While there’s no real puzzle to solve, you’re still going to need to learn where enemies spawn particularly for the boost-ring sections. You’ll also need decent platforming and timing skills as well as very high damage output for the final block. This quest is not particularly friendly to certain class combos, particularly anything dependent on striking weak-points.

Enemies will grant EXP but they will not drop anything. As such, they will not count towards collection files. There is also no new Client Order for this quest. 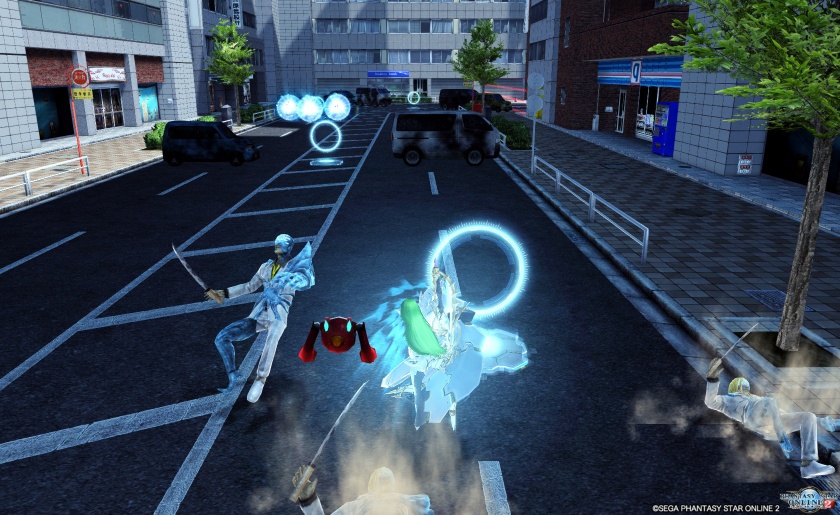 Enemies are a bit of a mix in terms of stat mods. All enemies placed around boost rings have reduced HP, though for some you’ll still need to have passed between 2 rings in order to one-shot them with the kick. The rest of the enemies have their regular free-field HP (not the slightly reduced Arks Quest variety), which is particularly important for the final block. 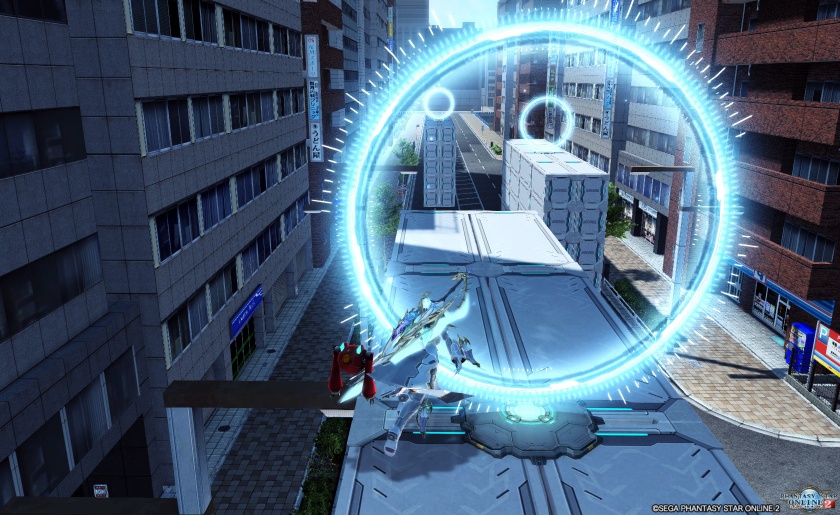 There are two sections in the quest which will require you to do some platforming (not counting the first one which is just to introduce you to the concept). The first is easy enough, though the final jump will require you to hit jump at pretty much the last second to make it.

The second is a bit rougher, as you’ll need to avoid being bombarded or you’ll lose your runspeed as well as having to land on much more narrow platforms. Your controller best be in good shape if you’re not using Mouse and Keyboard!

The final block is a fight against Train Ghidoran. As said, this is using Free-Field levels of HP so it is very durable. What’s more is as time goes on more and more enemies will spawn; starting with 2 tanks, then adding in helicopters and roadrollers. The longer the fight is, the harder it’ll be!

It’s a fun enough quest, though it will be particularly rough on some class combos due to the nature of Train Ghidoran and lack of weak-points on many enemies. The quest essentially favours high-burst short attack time classes or any that can crowd-control Ghidoran effectively. As such, the likes of Banish-Graptor combos won’t be of much use here as Train Ghidoran doesn’t really expose itself for long enough for them to even hit.

Is it worth running over others for your weekly TACOs? Honestly no, but it’s short enough that you could run it for something different to do so it’s a bit like Traces of Darkness in that respect. Naberius 2 and Harukotan remain the most efficient ways to do your weeklies for now.

So turns out there were a bunch of other skill rings announced during TGS that sorta escaped the main show I guess, which Gheaven covered here. Most of them seem to be support oriented, I’ll go over them quickly;

A lot of Just Reversal oriented rings coming up it seems, two  of which are L / Rings. I doubt that JA Combo will be interesting enough for people to want to socket into 12* units, mind.

Not really sure who this ring is for, as melee-weapon types generally have access to Healing Guard anyway. This ring just enables those who don’t run a Hunter sub to use it I guess.

Again, I’m not sure who this is for. Force typically won’t be able to use it because they run Techer sub and you probably don’t want to get buffed by a Bouncer/Hunter… though I guess any Shifta is better than no Shifta! Pretty sure there are better rings that a Bouncer is much more likely to be wearing, mind.

The most interesting of this bunch is “L/Non Weak Bonus“, which will allow Launcher attacks to count for Weak-Hit Advance bonuses even if they’re not hitting weak spots. This is a significant buff for Launchers as you might expect, though I do wonder what limitations may be put on it. Weak-Hit Advance specifically boosts damage from shooting attacks, but not all Launcher Photon Arts are. Crazy Smash for example is R-Atk scaling striking damage, which may mean it won’t benefit from this ring. In any case, Launcher users rejoice because your weapon is going to be a lot more effective once this ring arrives.

These rings will be added with the rest some time in October.

With the release of the official update page came a few details about the upcoming custom PA/Techs. Lets go over them

So that blade-extension effect was not just for show! As a Hunter main I’m obviously fairly eager to see how much of an effect this has on my play-style. The additional range and power should mitigate the PP issues that Sword can suffer from.

Nothing really new about this.

The mid-air detail is new, though I don’t think Ranger really has that much trouble dealing with airborn enemies. Might make the pre-broken knee portion of Magastu more fun if you’re incline to use anything other than End Attract I guess?

Nothing really new about this.

I don’t know enough about Jet-boot usage to really comment on this, though removing the charge portion of the attack does at least give them a directed quick-fire attack which I believe they sorta lacked? Correct me if I’m wrong on this.

No new details for the techs. Much the same thoughts as before; these are both seemingly engineered to make melee Techer’s life easier.

So turns out those two new skills heading Summoner’s way in October were indeed not the “Class Rebalance” listed on the long-term schedule. Sega made a post here on their update page for October laying out all of the changes. With thanks to translations provided by this PSOWorld post.

The main thing I have to say is why the fuck did this change take 4 and a half years to implement? Even more bafflingly so after they introduced this very feature for Wand Lovers all that time ago! Stance skills should have been this way from the start, so this is a welcome quality-of-life adjustment it’s just it kind of makes me despair that it took them this long to realise timers on stances were not a good idea…

Should help with preventing incoming damage when using this; as being locked into the animation and having an attack go from tell to finish before you can guard did kind of suck.

Nova Strike already has decent AoE I think, so I’m curious to see how much larger they intend to make it. Not sure what function the slower fall would serve…

I guess this adjustment is to make it a better travelling PA as right now it’s a little awkward for this (you can only cancel just after the first strike has started, giving it a kind of stop-start effect.)

Not entirely sure of the purpose of this change, unless it’s to make it easier to chain Ignite Parrying together.

Again, I assume this is to make it easier to spam the attack.

Hunter got the most changes of all the classes. All fairly minor changes, eh? This is going to be the trend for the rest of this balance update as you’ll see.

So double-saber users can throw themselves into the action more quickly I guess.

Odd change, not sure why they did this. Perhaps knuckle users would be more informed.

Was this even that big of an issue? I admittedly am only a casual Katana user at best, but compared to the hit-stop I experience on other weapon types I can’t say I ever really noticed this.

A bit of help for Cery, which is a pet I just don’t see used that often anymore. Not helped that I believe Maron Chaser is considered superior to Cery Chaser, but I’m not experienced enough to say if that’s true or not.

I take it this means that you’ll be able to visit Pietro for Pet Limit Breaking with 12* pets now. The current cap for 12* pets is lv95 and there’s a fairly significant stat gain between that and 110. Essentially, this is a big buff to 12* pets, though honestly I could swear that 13* pets are more common.

Yet more changes for a weapon class that no one uses now and no one will use after.

All improvements, all things people likely won’t notice because no one uses Gunslashes seriously.

So yeah, overall these are a bunch of minor tweaks and quality of life changes. Slightly disappointing as there’s a bunch of Hunter and general issues I’m aware of that I’m sad they didn’t address and I’m sure those more specifically experienced with other classes feel similarly. I guess I expect a class balance to shake up the meta slightly, which in this case the only two classes this may have a chance of happening for are Hunter and Summoner I feel. Wether the changes for either class will turn out to be all that significant or not we won’t know until they’re out I guess.

Of course, while the class balance changes are mostly minor the addition of L/Non Weak Bonus and some of the Photon Art crafts may shake things up significantly enough on their own! That’s all for this post; it ended up a bit longer than I intended but there were a fair number of little tidbits this time. As always, let me know if there’s anything I got particularly wrong.

The official site was updated today with this page, which sheds details on the content that’s coming up upon release.

To summarise what’s coming up:

With the cash shop opening, new items will become available to players, including Lisa’s outfit, Xeno’s outfit and Echo’s outfits. As well as the wedding dress and suit displayed below. All costumes are available through Scratch and can’t be bought directly. Sucks, but if you want them you’re either gambling for them or buying them from player shops.

Sega also uploaded a video to YouTube, but most of it is footage you’ve seen before if you’ve watched other videos from them. The Time-Attack Quest footage is however new I believe.

Didn’t think they’d wait too long to roll this out, though I did expect a bit more notice than 2 days!

Well that’s PSO2’s future set, at least on the Japanese side of things. On the western side of things there is still no word, unfortunately. The @phantasystar Twitter, Sega of America’s official Phantasy Star Twitter account, has gone eerily silent. They only had Phantasy Star Portable 2 left to go through before whatever it was they were gearing up to announce, so seems something might have gone awry there. Of course it feels pretty certain that they were going to be announcing PSO2 in some form, so I am eager to see what they were set to say. Hopefully that silence won’t be permanent.