Progeny of the Apocalypse

Double’s wall attack can be evaded through i-frames but it cannot be blocked. Not sure why this is. If you see it coming, switch to a mirage escape weapon if you don’t think step will cover it. Double’s rush attack can be blocked, but if you’re not confident enough you can just run to any corner of the map and it can’t hit you anyway. 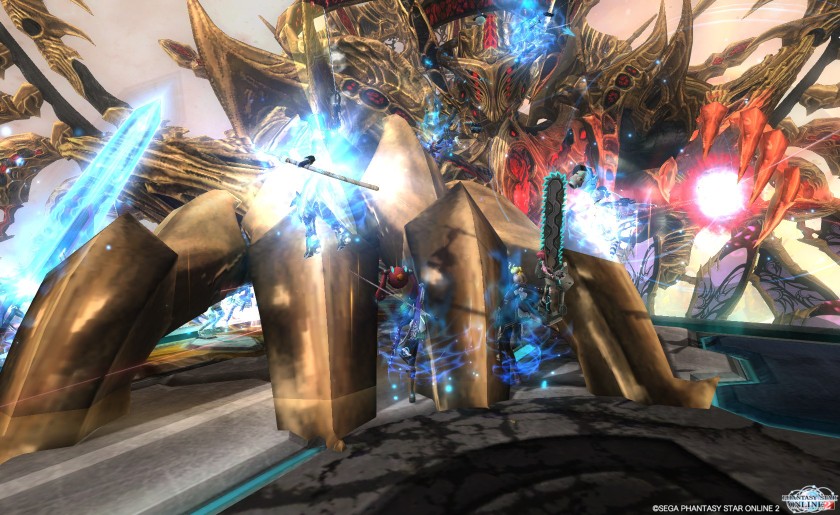 The Profound Darkness is classed as a Darker Aberration. This means that Nemesis Weapons and Coat Doublis can do additional damage to it but regular anti-darker weapons won’t. As an aberration, it’s also susceptible to Ultimate Buster. While this doesn’t matter terribly as the fight is a pretty much guaranteed win anyway, this may be useful to know if you’re aiming to maximize your DPS against it. Remember, Ultimate Buster cannot be put onto 13* weapons.

When persona attacks you during the penultimate phase of the fight, it seems to be a DPS check. Persona’s HP and status is shared across the entire multi-party, so it’s a raid-wide DPS check not a personal one. This means that, occasionally, you could be doing as much DPS as you could possibly pump out and still fail because the rest of your multi-party wasn’t pulling their weight. The attack Persona uses cannot be evaded (at least not easily), just-guarded (the guard will land but you’ll take damage anyway) or mitigated by any skill in the game except for Iron Will and possibly Katana Combat (need confirmation). It can be avoided by using a Photon Blast however, so if Persona is about to use the attack (you’ll know because you’ll no longer be able to target them but they won’t be incapacitated).

That said, recently I was in a group filled with Techers who were constantly using Shifta/Deband and Megiverse yet somehow we still managed to pass this check. This makes me wonder about the party I was in which managed to fail it…

According to a note on Swiki, it’s possible the damage that Persona deals is relative to the amount of damage you inflict upon it during this phase. This video certainly seems to support this notion. While cool to know, it seems if you’ve been attacking it much at all that the power scales so sharply that you’re almost certainly going to get one-shot by the attack.

Astral Soul can be transferred using a Soul Receptor, but only at a 10% success rate.

It still isn’t worth all this effort in my opinion.

Through experimentation, the player-base has noticed that Darkness Soul boosts the fusion success rate and transfer rate of Returner. It seems to boost it by around 10%, but could use confirmation that this is the same across all levels and case scenarios.

So now it’s been a week’s worth of defeated Doubles and Profound Darkness as well as random encounters with Elder and Loser. We now have a much better idea of how many stones we seem to be able to get from each boss.

Rates are dependent on the good old random number generator and are affected by rare drop-rate boosters. For Nero, it seems the enemy needs to be lv76 or higher. Rates are based on things I’ve observed myself and rates I’ve seen reported on forums/twitter etc, so they may not be 100% accurate. Treat it as more a guide.

Double and the Profound Darkness seem to have the worst Nero drop rate of any of the emergency quest bosses, with myself having gone multiple runs with 350% rare drop rate boosters active without seeing a single Nero. They are however the only source of Caligula stones, so you’ll need to run it if you want the weapons.

While you can get Neros from the Falz humanoids, the only place to reliably encounter them is in high-risk Super Hard Advance Quests. As running these by yourself is still a relatively expensive endeavor and you still might not see Dark Falz Angel that much it already isn’t the most enticing option. Doesn’t help that their drop rate is reportedly abysmal, with reports of only getting a single stone per four encounters with boosters running. According to Swiki, they can drop from lv71+.

Elder and Loser’s own individual Emergency Quests seem to be by far the best way to obtain Nero stones, boasting a better drop rate and with the additional advantage of being able to run the quest multiple times (if you have lv70+ alts anyway).

So how long will it take to get that Austere weapon of your dreams? Well I cant necessarily say for all cases, but I can comment on my own personal progress. Currently I have 91 Caligula and 56 Nero. Assuming the Emergency Quest schedule remains somewhat similar to this, as a player bound to one Ship I’m looking at a little over a month to get one. Though take into account that I also have all the other materials required already, but those can be obtained at your leisure for the most part anyway. This rate also requires you to be able to attend every instance of Progeny of the Apocalypse and any Nero-dropping EQs (the random Falzes at least), of which I think I’ve only missed one this week. That’s a fairly tall order for anyone with a life, work, school, etc…

As Nero can be obtained in decent quantities from two other Emergency Quests, it’s possible that Caligula may be the tougher material for more hardcore single-ship players to obtain seeing as it only comes from a scheduled one. This won’t be an issue for those running characters on other ships for the sole purpose of getting additional Progeny of the Apocalypse runs. Of course, given that both Elder and Loser’s individual EQs can happen randomly on different ships, multi-shippers will also have more chances at the Neros from those quests too. Indeed, multi-shippers have gotten 60% Austere weapons already, although this was through trading for one then using Ideal/Gold Badge weapons to max out their element. A bit annoying for those of us who don’t feel like spending money on top of the money we’ve already been spending on the game for essentially a shortcut to the best gear.